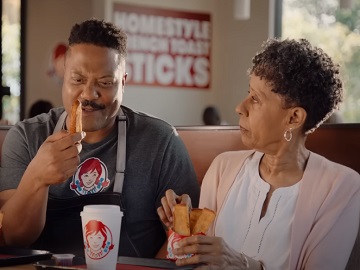 Wendy’s has dropped a new commercial for its Homestyle French Toast Sticks, highlighting that they are so good that others just can’t compete.

The 15-second ad features a Wendy’s worker sitting at a table with his mother and praising the restaurant chain’s French Toast Sticks while eating one. “So sweet, so crispy, nobody makes breakfast as good as Wendy’s new Homestyle French Toast Sticks,” he says to his mother’s surprise, who – shooting her son a reproachful glance – can’t help asking him “Nobody?”. Without acknowledging the mistake he has made, he repeats that nobody. When the mother encourages him to keep talking, saying she can’t hear him, the man realizes that he should probably stop.

Wendy’s says its French Toast Sticks, available since August 2022, are made with real eggs and dipped in milk custard with a hint of vanilla and each bite “delivers a mouthful of flavor, striking the perfect texture balance of a soft custardy interior and crisp, golden-brown crust.” The menu item can be bought in a 4-piece, 6-piece, or 6-piece combo. The latter features Seasoned Potatoes and a beverage with it.

This is not the first ad promoting the Wendy’s Homestyle French Toast Sticks. In a previous commercial, another Wendy’s worker, named Tyler, made the mistake of praising this menu item right in front of his mother, who can’t help from asking if they are better than hers. He has trouble answering the question and starts mumbling something no one could understand. “Answer the question, Tyler!” his mother asks obviously upset.

The fast-food chain has been also advertising its Hot & Crispy Fries, the holiday-themed Peppermint Frosty, the $3 Breakfast Deal, consisting of a breakfast croissant and seasoned potatoes, the Pretzel Bacon Pub Cheeseburger, and more.