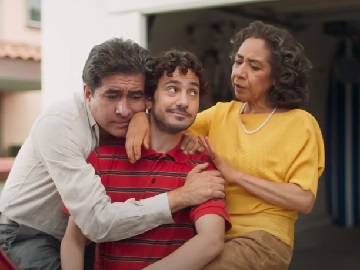 State Farm has released a new Spanish ad to promote its car insurance.

Titled “New Beginnings”, the spot features a young man preparing to move away from home and literally carrying his parents on his back to the van, where a friend helps him pack his stuff.

The mother and father are willing to accompany him and be there in case something happens on the road, but their son reminds them that he is with State Farm and can contact an agent any time, if anything happens, 24/7. Hearing the news, the parents get down off his back and go inside, wishing him to have a good trip.

At the end of the commercial, the voiceover says the tagline “Like a good neighbor, State Farm is there”.

In another similar ad, the young man literally carries his worried parents on his back on a date. They get down when he tells them that State Farm will be there 24 hours, but his date is not delighted at all by his arrival, so she shuts the door in his face once his parents enter the house.