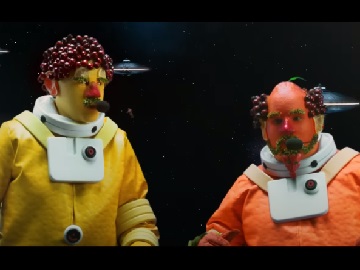 Starburst promotes its fruit flavored juicy candies in a commercial based on the idea that no one on Earth seems to know how they make STARBURST taste so juicy and maybe the answers are out there, a couple billion miles away.

The spot, directed by Danish experimental filmmaker Bine Bach, features two coworkers in a retro space station willing to find out how do they make Starburst taste so juicy. When one of them pushes a button to ask the whole universe, two alien creatures are shown talking to each other. “Humans are asking for juice and we are the juice,” one of them says.

The ad concludes with the voiceover saying the tagline “Unexplainably Juicy”.

For its “Ask the Universe” campaign, the fruity candy brand teamed up with astrophysicist and influencer Kirsten Banks to raise awareness on TikTok about its challenge, which consisted in having TikTokers make videos asking the question “How do they make Starburst taste so juicy?” in a way that might resonate with higher life forms lightyears away.

The most compelling videos were set to be beamed into space literally via proprietary technology from SpaceSpeak, an organization that claims to send messages into space via radio waves to any extraterrestrial lifeforms that may be listening.