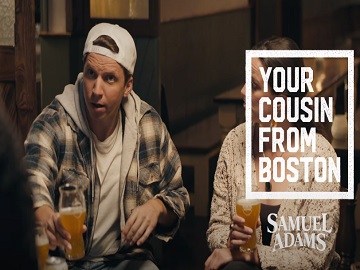 The spot features a focus group where a woman introduces the Samuel Adams Just the Haze, saying it has all the taste of an APE but no alcohol.

At this point, a man introduced by the voiceover as “Your cousin from Boston” says he doesn’t want to like that delicious non-alcoholic drink, but then shouts “Congratulations! I like it!”. “Is that what you want to hear?” he then asks.

The brand also also promoted its various other drinks, in the past. Among them are Wicked Hazy, which was advertised as the brand’s “juiciest IPA ever” in its Super Bowl 2021 commercial, and American Wheat Ale, which is brewed with two-row pale malt blend and malted wheat and with special ingredients, including lemon peel and Grains of Paradise (a rare pepper from Africa used since the 13th century to create a spicy flavor).