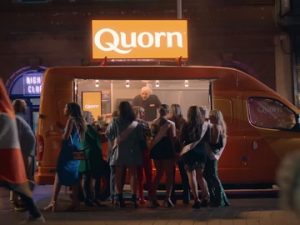 Quorn Foods continues its “So Tasty Why Choose The Alternative?” campaign with a new installment, promoting the Crunchy Fillet Burgers, the Crispy Nuggets, and the Sticky BBQ Wings.

The 30-second spot features a diverse cast of people on a night out, in the city, enjoying what seems to be, at first sight, chicken. However, as the advert ends, an onscreen line informs that no chicken was eaten in this film.

A young couple is shown sharing a passionate kiss in a bus station and having a box of BBQ wings by their side, a young woman is shown eating some crispy nuggets while being carried by her boyfriend on his back, a middle-aged woman is shown taking a quite daring photo with a police officer on the sidewalk, a teenager is shown asking a girl for her phone number but she’s busy eating her Crunchy Fillet Burger, a man is shown eating in the backseat of a taxi, and a bride-to-be telling her friends she’s starving.

The end of the advert sees the bride, her friends and other individuals buying nuggets from a Quorn food truck.

The voiceover says the brand’s tagline “So Tasty Why Choose The Alternative?”.

Quorn’s range of products also includes sausages, mince and pieces – all of which are high in protein, low in saturated fat and a source of fibre. The offering also includes the recently launched Quorn Brilliant Bangers and the frozen favourite Quorn Swedish Style Balls.

Quorn offers, on its website, a collection of recipe inspiration, from meal prep winners to delicious dishes under 500 calories and midweek dinner recipe ideas, and meals made with just 5 ingredients in 5 simple steps.