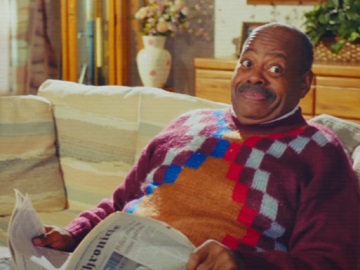 One of the spots opens with a man complaining to his father that kids are expensive and that his daughter, Katie, now needs braces. The father suggests to switch his car insurance Progressive and save hundreds, but his son doesn’t seem too optimistic about it. “I don’t know, dad,” he answers.

At this point, the Family Matters actor, who played the patriarch Carl Winslow for nearly a decade, is shown putting aside his newspaper and saying “Maybe try and switch your car insurance to Progressive. You could save hundreds!” The man exclaims that this is a great idea, which makes his real dad point out that he said the exact same thing.

“Some day when you’re a father, you’ll understand,” the TV Dad tells the read dad, who replies that he is his father. “It’s not a competition,” answers back the TV Dad.

The commercial ends with the voiceover saying the tagline “Listen to your TV Dad” and adding that drivers who switch and save with Progressive save nearly $700 on average.

VelJohnson will share more fatherly wisdom in a series of several other ads, set to be released by the insurance company in the future.