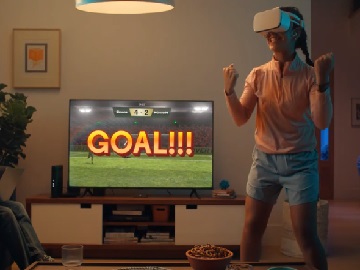 The spot informs that Optimum’s new 5 Gig Fiber Internet helps Simone Suarez go farther faster. “With 99.9% reliability and speeds more than twice as fast as Verizon and Frontier, she can become a sports sensation,” the voiceover says, adding that, with whole home WiFi coverage, Simone can show off her soccer skills from any room in the house.

At the end of the commercial, the narrator urges viewers to get Optimum Fiber for as low as $30 per month.

This offer is valid with Auto Pay and Paperless Bill with mobile plans.

Optimum Fiber, the new 100% Fiber Internet network delivering speeds up to 5 Gig, offers three different packages: 1 GIG, with download speeds up to 940 Mbps, Optimum 500, with speeds up to 500 Mbps, and Optimum 300, with up to 300Mbps, the perfect speed for multi-device HD streaming, gaming and more.