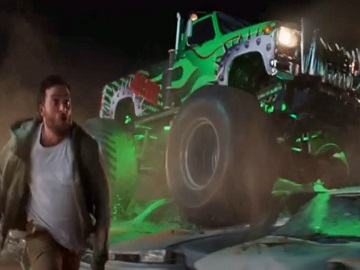 Mountain Dew has dropped a hilarious new ad to showcase the lengths some would go for a Mountain Dew.

The 30-second spot features a guy with some friends at a State Fair, where a monster truck is about to run over several cars. He complains that the valet has taken too long to park his car, but he soon realizes that his car is actually in the line of vehicles “prepared” for the monster truck to be crushed. At this point, he sprints onto the derby and almost gets run over by the truck. His friends are shocked to witness the episode, but it turns out he had rushed out there to grab his bottle of Mountain Dew, left in the cup holder. Upon his return to the seat, they burst into laughter, hearing him say he got it. The protagonist cannot resist taking a sip from the bottle that he saved in the last moment.

The commercial ends with the voiceover saying the tagline “Do the Dew”.

Last year, the brand has launched a raspberry lemonade drink called Spark and has enlisted Charlie Day to promote it in a campaign created in partnership with TBWA\Chiat\Day. The marketing stunt, which saw Day as an action star, a power endorser and a grandpa, also marked the brief return of Puppy Monkey Baby.