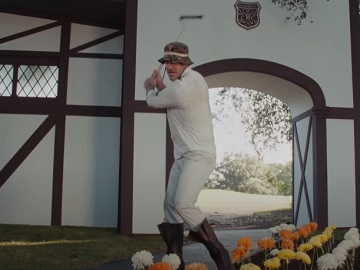 “This February, Michelob Ultra is taking over the Big Game,” the voiceover says at the end of the spot, urging viewers to order ULTRA now.

Another spot features women’s soccer star Alex Morgan pouring a beer from a tap in her golf bag like Rodney Dangerfield does in the movie and another one features Mexican boxer Saul Canelo Alvarez on a beer run.

They all will co-star, along with Serena Williams and Brian Cox, in the brand’s golf-themed Super Bowl commercial, which is set to be released during the Big Game, on February 12.

Previous: Starburst Ask the Whole Universe Aliens Commercial
Next: State Farm Guy Moving Away from Home with Parents on His Back Spanish Commercial