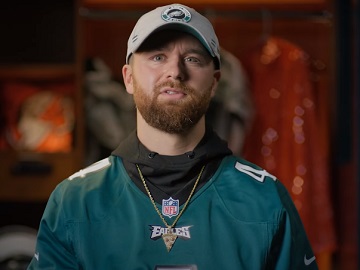 Little Caesars has dropped a new ad, titled “The Ritual That Never Ends” and related to the Super Bowl.

The spot features Jake Elliott of the Philadelphia Eagles introducing himself and revealing that his pregame ritual is eating a slice of pizza before every game. At this point, a male voiceover start singing “That’s his pizza! Pizza! Pregame ritual”, which makes Elliott mention it’s just the ritual he does before every gane.

The singer starts the song again, singing “We don’t have the right to say that guy’s name, will play his song, so here’s some Polka instead”.” The video cuts to onscreen lines that read “Free Polka stock music that is great to listen to while eating pizza before kicking footballs in the big football game.”

Annoyed, Elliott asks if they want him to do anything else and the singer instructs him, i the same singing style, to ask people what their Pizza Pregame Ritual is and leave their answers in the comments. The player does it but when the song starts playing again, he stands up and heads out, saying he’s out of there.

The singer asks him to wait and not go because he has abandonment issues.

Little Caesars, named Official Pizza Partner of the NFL, has recently introduced contactless options for both delivery and carry-out through the Little Caesars app.