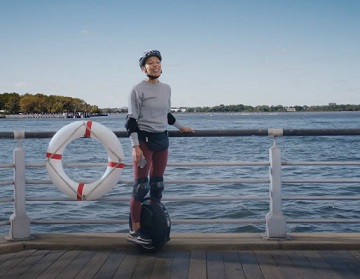 Riding an electric unicycle is harder than saving on car insurance. This is the conclusion of a young couple in one of the latest ads released by Liberty Mutual.

The spot opens with a young woman saying that Liberty Mutual customizes your car insurance so you only pay for what you need and shows that those who switch can save $652. She also mentions that with the money they saved, they tried electric unicycles. At this point, her partner shows up, telling her he thinks he got it but he loses balance and falls in the water. Looking at him, not worried at all, though, she instructs her friend to doggy paddle.

The commercial ends with the tagline “Only pay for what you need” while an onscreen line urges viewers to switch and save $652.

The Boston-based company, the sixth-largest auto and home insurer in the U.S., sells full lines of coverage for automobiles, homeowners, small commercial, valuable possessions, and personal liability insurance. It is famous for its ad campaigns featuring Doug and LiMu Emu, which was created with cutting-edge CGI technology.

Another commercial that encourages audiences to switch to Liberty Mutual and save highlights that customizing your insurance with Liberty is a lot easier than pie. The ad features a pie-eating contest sponsored by Liberty Mutual, where three contestants, seated at a table covered with a spread emprinted with the text “Switch & Save $652”, are ready to start eating their pie. After the host thanks the sponsor and mentions that Liberty Mutual customizes your car insurance so you only pay for what you need, the contestants start eating but it turns out they have some unexpected opponents: some seagulls that start squawking and targeting the pies that need to be eaten.