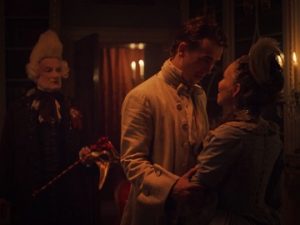 Gousto puts its recipes under the spotlight in its latest ad campaign, titled “Steal the Show”.

The TV spot, created by agency Mother London, features scenes from a period drama in which the dramatic performances on screen are overshadowed by the gastronomic marvel in the kitchen beyond the TV. A young man, for instance, who is looking with his lover at the dish a Gousto customer prepares, reveals that he has dreamed of sweet potato with cumin but never dared. Caught by one of their parents, the two lovebirds also reveal they love quinoa, but the Gousto recipe steals the show as the family turns off the TV and sits at the table to enjoy their meal.

“Steal the show with 75 recipes every week from £2.99 a meal,” the voiceover says at the end of the advert.

The spot debuted on Christmas Day in the biggest and best Christmas TV programming.

The new “Steal the Show” campaign, which aims to put dinner back at top billing for the evening’s line-up with Gousto’s unrivalled selection of easy-to-cook recipes, quite literally, stealing the show,” as Mother’s head of strategy, Matt Tanter, said, also includes OOH, radio, as well as ads on the brand’s social and digital channels, created as movie trailers that capture the flavour and variety of Gousto recipes using different film and TV genres.