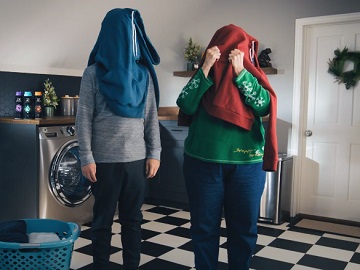 Downy continues its “Believe” campaign, which builds up to the Super Bowl, with a new installment.

The campaign, created in partnership with agency Saatchi & Saatchi and Woven Collaborative, revolves around a masked celebrity whose identity will be revealed during Downy Unstopables Super Bowl commercial only if the in-wash scent booster’s 12-week freshness claims prove to be true. It debuted on December 12 with a spot featuring the masked celebrity hiding their identity under a sweatshirt, smelling the clothing item and talking about what will happen if the scent takes a turn for the worst between now and game day.

The latest ad features a visit from Nana. The masked celebrity declares that they’re still sniffing that hoodie until the Super Bowl because they don’t believe Downy Unstoppables makes your clothes smell fresh for weeks. “There’s no freaking way, right, Nana?” he asks his nana, whose face is also masked with a sweatshirt.

“I think you had that thing on your head too long,” she tells him, adding “This smells amazing!” (referring to the piece of clothing she’s sniffing). This makes the man react in an unexpected way: “Nana, I’m gonna politely ask you to leave my laundry facilities. I better start hearing some slippers shuffling out of here ASAP!” Nana tells him she wishes he’d stop talking and adding, again, “Amazing!”.

The spot ends with the voiceover saying the tagline “Over 12 weeks of freshness. You gotta sniff it to believe it.”

This will be the first time the Procter & Gamble-owned brand will advertise during the game in over a decade. The Super Bowl will be on FOX, which set a record for charging a fee of over $7 million for a 30-second spot.