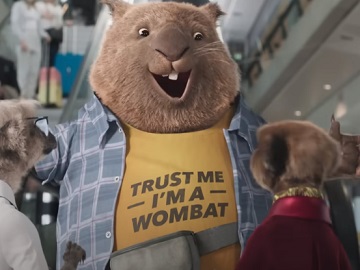 Compare the Market has released a new ad to promote its website.

The spot features Aleksandr and Sergei waiting for Aleksandr’s nephew at the airport. They hold a cardboard with the guest’s name, Carl, who it turns out is a wombat wearing a T-shirt featuring the text “Trust me I’m a wombat”. Carl stumbles on the stairs and falls to the ground, but he immediately stands up and hugs his uncle Aleksandr, for whom he has a gift that he had to smuggle in his pouch. The gift is a yellow frog that jumps into Sergei’s hands. Shortly after that, Sergei finds himself surrounded by FBI officers who catch him and take him away. He tries to defend himself by declaring that it was the wombat, but no one listens to him.

“Don’t wombat it, Meerkat it,” the voiceover says at the end of the commercial.

In previous ads, the insurance intermediary promoted its Meerkat Meals rewards program, which enables Compare the Market users to enjoy 2-for-1 meals (starters, mains and desserts) every Sunday – Thursday, for a whole year, when they purchase through Compare the Market a qualifying product, as well as Meerkat Movies, which offers 2-for-1 cinema tickets, but only one day/week.