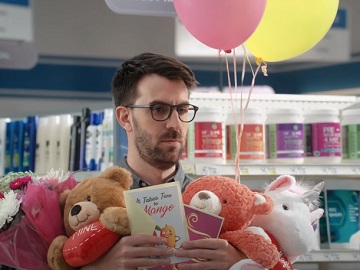 The spot features the comedian approaching a man in a drugstore and asking him if he ever tried cashbacking. Without waiting for an answer, he shows him the Chase Freedom Unlimited, informing that it lets him earn 3% at drugstores. Later on, the man returns to Hart carries lots of products, such as teddy bears, cards, flowers and balloons, and asks him if he can save on something special for a first date. Realizing that all those are for a first date, Hart asks the man to join him.

The commercial ends with the comedian urging viewers to “Earn big with Freedom Unlimited with no annual fee” and adding the tagline “How do you cash back?”

Hart has starred in several other ads for the bank’s Freedom Unlimited credit card since he became a brand ambassador for Chase, in January 2019.

The comedian/actor signed then a multiyear partnership to promote financial wellness and the Chase Freedom Unlimited credit card in a campaign that also includes digital video, workshops, events, and GIFs.

In one of the ads, he shared the screen with Catherine O’Hara, the famous actress, who played Kevin’s mother, Kate, in the “Home Alone” franchise. The spot shows her in a store, realizing she lost Kevin Hart.