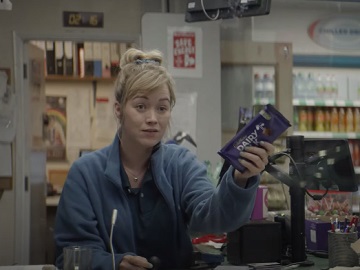 Cadbury has launched a new ad campaign to remind us all that “There’s a glass and a half in everyone.”

Created by VCCP London and directed by acclaimed director Steve Rogers, the spot features a man at a gas station, who notices that the woman at the counter is in a bad mood, so he decides to buy a Cadbury Milk chocolate bar and let it there for her. When the girl reminds him that he forgot the chocolate bar, he smiles and walks away.

It soon turns out that the man is her father and has made a small gesture to make her work shift better.

“Love you, Dad” she says over the PA, across the gas station.

“In this latest film we have introduced lighter moments, while still retaining the authenticity from our other stories that have shown how powerful moments of generosity can be. This fits in with the campaigns we have done for the last five years that showed different types of generous givers and how small gestures can make a difference,” Gemma Flanigan, UK&I Associate Marketing Director at Cadbury, said in a press release.

The advert is set to run until 22nd January. Shorter versions will also run across TV, cinema, BVOD and Youtube until 5th February.