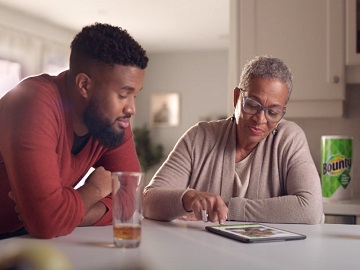 Bounty brand promotes its Paper Towels in a new commercial, highlighting that Bounty paper towels pick up messes quicker and each sheet is two times more absorbent so you can use less.

Titled “Swipe,” the spot features a middle-aged woman who’s using a dating app on her tablet, at the kitchen table, in the company of her son. As she finds a man she likes, she swipes right, but she accidentally spills a glass of tea, which makes both her and her son shout “No”. Luckily, her son grabs the Quicker Picker Upper and manages to avoid the spilling to extend.

The voiceover says that, “when you gotta get it done, just one sheet is all you need because one sheet of Bounty absorbs more than theirs so you can use less”.