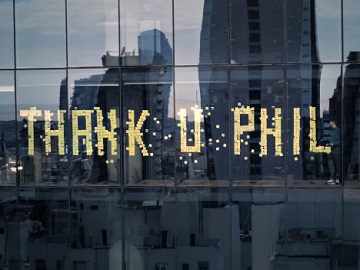 The spot features a diverse cast of people saying “Thank you” to someone named Phil, who helped them find the job they had wanted. However, these persons do not literally say “Thank you”, but deliver this message in various innovative ways – from writing this message on a wall with stickers to holding letter-shaped balloons that form this sentence and even to writing it in the sky.

At the end of the commercial, the voiceover urges viewers to visit ZipRecruiter.com and find out what job Phil will help them discover.

Serving as soundtrack is the single “Thank You (Falettinme Be Mice Elf Agin)” released in 1969 by Sly and the Family Stone, from the Rock’s Greatest Hits album. Launched in 2010, ZipRecruiter, which is now the #1 rated job search app on Android & iOS, has over 7 million active job seekers each month and over 40 million job alert email subscribers. When you sign up for job alerts, the platform’s powerful matching technology will send job matches right to your inbox.