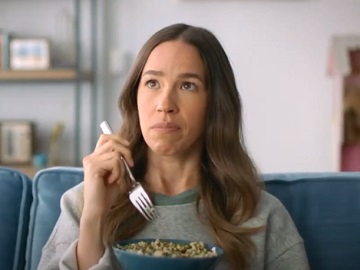 Zaxby’s promotes its Zensible Zalads in a new ad, highlighting that they have under 600 calories.

The spot features a woman who, after hearing on TV that Zaxby’s new Zensible fried chicken salads are under 600 calories, rushes to her laptop to search on Google if this statement is true. When a delivery guy arrives at her front door for a delivery, she asks him if a Zaxby’s salad really has under 600 calories with the dressing and he confirms.

“You better believe it! The new Zensible salads are under 600 calories, only at Zaxby’s,” the voiceover says at the end of the commercial.

The Athens, Ga.-based chicken-finger concept said the salads, starting at $8.99, include a choice of grilled or fried chicken and light vinaigrette dressing.