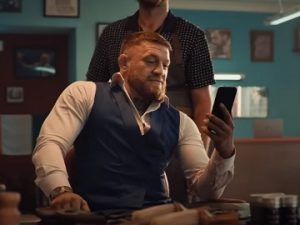 Conor McGregor wants to look like an investor in the latest advert released by XTB, a global and market-leading investment company that offers one of the most popular online trading platforms.

The 60-second spot features the multi-weight UFC champion entering a hair saloon and asking for a different haircut, mentioning that he wants to look like an investor. At this point, several other men declare that they invest with XTB. While some of them choose currencies, one of them says “commodities are really something”, but options also include stocks, which are the preferred alternative by another investor. When a middle-aged man carrying a walkie-talkie shows up, shouting that he’s the real investor there, all of the men in the room, McGregor included, take a look at him and then burst into laughter.

“That’s not how you invest these days. Download the app, open an account, and get access to thousands of markets,” McGregor says at the end of the advert.

XTB’s new global branding campaign, which promotes a wide range of investment solutions, will have McGregor as its Brand Ambassador for the next two years.

The athlete, who is also an entrepreneur and global business icon, has launched several businesses, including Proper No. Twelve Irish Whiskey in 2018, which has become the fastest-growing whiskey brand on the market.

XTB ranks among top five global brokers in terms of the number of active clients and offers access to more than 5,500 financial instruments, including real stocks, ETFs and CFDs for Forex, indices, commodities, stocks, ETFs and cryptocurrencies.