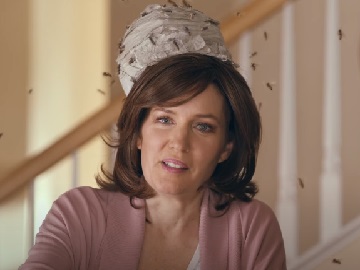 Xfinity has launched a new ad campaign, titled “Not That Bad”, to promote its mobile and home internet.

One of the ads features a woman living with a hornet nest stuck to her head. She says “it’s not ideal” and declares that she will manage, just like she manages without home internet. However, as the spot continues, it turns out she has difficulties getting her jobs done because the internet on her smartphone, which she uses as a Hot-Spot, is not reliable. The hornet nest stuck to her head also turns out to ruin various aspects of her life, including the relationship with her son, who doesn’t want her to get closer to him and give him a good night kiss.

Another ad in the campaign shows the struggles of a man with a leg caught in a bear trap. He believes it’s not that bad and he can make do, just like he makes do without home internet, but he soon comes to realize that it’s actually bad.