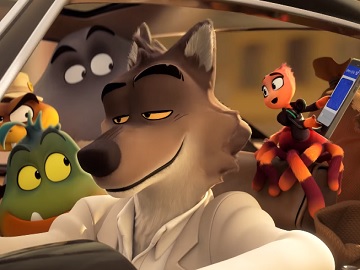 Xfinity invites you to ride along with the characters from the movie The Bad Guys as they pull off a major heist with the help of Xfinity mobile.

The 30-second ad features the five bad guys – pickpocket Mr. Wolf (played by Academy Award winner Sam Rockwell), seen-it-all safecracker Mr. Snake (Marc Maron), chill master-of-disguise Mr. Shark (Craig Robinson), short-fused “muscle” Mr. Piranha (Anthony Ramos) and sharp-tongued expert hacker Ms. Tarantula (Awkwafina), aka “Webs” – in a runaway car, trying to escape the police. “We already hit the bank, the museum, the jewelry store. Where to next?” Mr. Wolf asks his fellows. Ms. Tarantula gives him the answer, coming up with an idea: “Next we save hundreds with Xfinity Mobile,” she says, shocking the rest of the crew.

“You know, unlimited data, nationwide 5G at no extra cost,” she mentions, making Mr. Piranha say that’s a “steal.” “We’re saving so much it’s like stealing,” Webs points out. Mr. Wolf, who wants to know if it’s reliable, soon learns that it’s both reliable and fast.

The commercial ends with the voiceover saying the tagline “Wireless savings so good even the Bad Guys love it” and urging viewers to switch to Xfinity Mobile and see Dreamworks’ The Bad Guys now in theaters.

According to the official synopsis, “the Bad Guys set out to fool the world that they are no longer bad, under the tutelage of their mentor Professor Marmalade (Richard Ayoade, Paddington 2), a guinea pig. Along the way, though, Mr. Wolf begins to suspect that doing good for real may give him what he’s always secretly longed for: acceptance. So when a new villain threatens the city, can Mr. Wolf persuade the rest of the gang to become … The Good Guys?”
Based on the New York Times best-selling book series by Aaron Blabey and directed by Pierre Perifel (making his feature directing debut), the movie was released in the US on April 22, 2022.