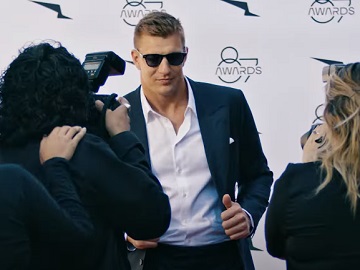 Titled “Feels Like A Dream”, the spot features the athlete attending a red carpet event and stealing the spotlight with his Wolf & Shepherd Crossover Longwing in honey and white. He is also shown on a set, filming a commercial while wearing an all-black outfit and the same footwear. Eventually, he is featured getting onstage to receive an award, wearing the same shoes.

As the spot ends, it turns out he was actually dreaming. The alarm wakes him up in the morning and, after getting out of bed, wearing nothing but briefs and the same Wolf & Shepherd brown shoes, he says he just had the craziest dream. Looking at his shoes, the points to them and even talks to them, telling them they were there.

Eventually, he adds the brand’s tagline, “Feels Like A Dream”, in voiceover, while an onscreen line directs viewers to the Wolf & Shepherd website.

Gronkowski, from the Super Bowl champion Tampa Bay Buccaneers, became a Wolf & Shepherd ambassador in 2021 and has starred in several other ads since then.