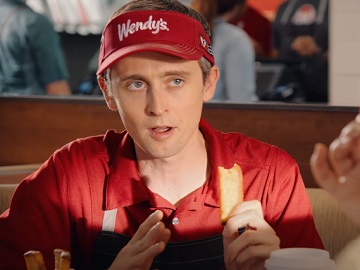 Wendy’s has released a hilarious new commercial to promote its new Homestyle French Toast Sticks, highlighting that they are so good they’re better than your mom’s.

The spot opens with a Wendy’s spokeswoman declaring that nobody’s ever made breakfast as good as Wendy’s new home-style French Toast Sticks and features a Wendy’s employee named Tyler eating one of these sticks while sitting at a table with his mother, who came by to see him. He says he’s never had French toast this good, in his entire life, which surprises his mom, who can’t help from asking if they are better than hers. He has trouble answering the question and starts mumbling something no one could understand. “Answer the question, Tyler!” his mother asks obviously upset. When one of his coworkers shows up to ask him the same thing, he urges him to get out of there.

The commercial ends with the voiceover saying “If you want a little something sweet in the morning, choose wisely, choose Wendy’s new Homestyle French Toast Sticks”.

The fast-food chain says its French Toast Sticks, available since August 15, are made with real eggs and dipped in milk custard with a hint of vanilla and each bite “delivers a mouthful of flavor, striking the perfect texture balance of a soft custardy interior and crisp, golden-brown crust.” The menu item can be bought in a 4-piece, 6-piece, or 6-piece combo. The latter features Seasoned Potatoes and a beverage with it.