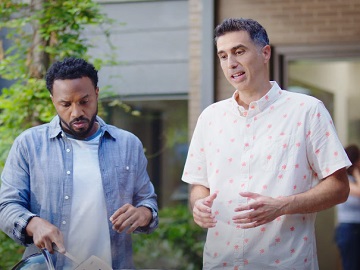 Waterpik has released a new commercial, created by agency 31,000 FT and directed by kaboom productions’ director Jordan Brady, to promote its water flosser.

Titled “Share the Obsession”, the 30-second ad opens with the voiceover declaring that, adding WaterPik water flosser to your brushing and flossing routine can be exciting. A diverse cast of people is then shown using this water flosser and sharing their excitement about it in front of family and friends, in unexpected moments. One woman even talks about it to a stranger, in the park, and tells her about “the things” she’s seen wash out in her sink.

The narrator mentions that Waterpik removes plaque even from harder-to-reach back teeth, for an experience worth sharing.

At the end of the commercial, a man in his bathrobe is shown going out of his house with a Waterpik water flosser in his hands and telling the mailman it’s next-level. The red-haired woman praising the device to a stranger jogger in the park is also shown again, gifting a Waterpik to a pregnant friend.

The spot ends with the voiceover saying the Waterpik tagline, “Share the Obsession”.