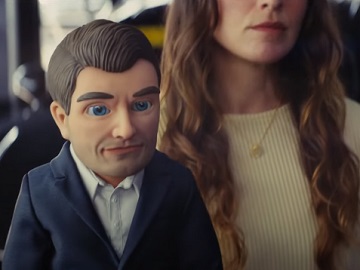 The 30-second ad features a woman at a dealership, looking for a low-mileage SUV with a V8 engine, but being ignored by the salesman. When she comes up with the idea of using her “puppet husband”, which is a ventriloquist dummy, the salesman who previously ignored her immediately shows up, telling the “bro” that he has “a sick SUV back there”.

“Never be ignored at a dealership again,” the voiceover says at the end of the commercial, which sees the woman having her SUV delivered to her address by Vroom. The voiceover urges viewers to buy their car entirely online, on vroom.com.

In its Super Bowl 2022 commercial, Vroom highlights that you can also sell your car through vroom.com, avoiding flaky buyers.