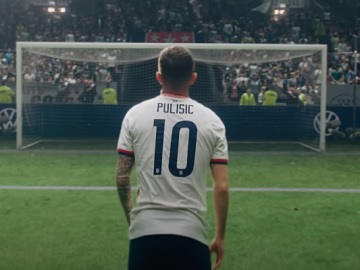 “What do Christian Pulisic and the VW ID.4 have in common? They were both created by a world of pressure.” this is the idea behind the latest ad released by VW for its all-electric ID.4 with zero direct emissions.

The spot includes a montage of episodes from Christian’s childhood and teenage years, when pressure from parents, coaches, and other people determined him to get better every single day. Laid back on a sofa, in a therapist’s office, the young player is asked where he thinks all this pressure is coming from. His answer is that pressure is coming from everyone. Chased by journalists, he escapes the office and, fast forwards, he runs to the stadium, where he has a game to play.

The end of the commercial sees two VW employees watching his football game during lunch break and talking about the pressure Pulisic must deal with. “Pressure makes diamonds”, says the man. Looking through the window at a red ID.4, the woman confirms.

The spot ends with the onscreen line “A car the world needs right now” and the “Drive bigger” tagline.