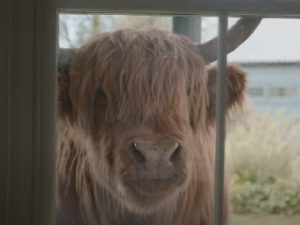 Virgin Media highlights, in its latest spot, that you can have “Entertainment for everyone on Netflix with Virgin Media”.

The 30-second advert features the Highland cow (shown in a previous ad riding a motorcycle) looking through the window into a family’s home, to watch various shows on Netflix. Thus, when the father and his daughter are lounging on the sofa, in their living room, watching Enola Holmes, the cow is right behind them, watching it, too. When they are watching Stranger Things, late in the evening, the cow is there, too, and when the family’s teenage son is brushing his teeth, in the morning, and watching Money Heist, the Highland cow is at the window, again.

The end of the advert sees the cow riding her motorcycle along with several Money Heist characters. “Entertainment for everyone on Netflix with Virgin Media,” says the voiceover.

In its previous ad, created by VCCP and titled “Why walk when you can ride?”, the company introduced its WiFi guarantee, which is the fastest of any major provider. Scored by the iconic Patrick Swayze’s Dirty Dancing track “She’s Like The Wind”, the spot shows the Highland cow riding a motorcycle and heading towards the breathtaking views of the Scottish Highlands.