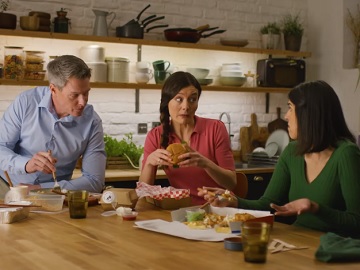 Plant-based food company Miami Burger and charity Vegan Friendly have released a new controversial advert to help consumers make the connection between the food they eat and the animal lives it costs.

Created by Bursnall, the ad features three friends – two women and one man – talking about animal welfare issues such as plastic in the ocean, bullfighting, and wet markets, all while eating meals containing fish and meat.

“Plastic straws are ruining the oceans. The poor fish don’t stand a chance!” one of the two women says, taking a bite of fish from her plate. At this point, images of fish moving down a processing line and being butchered are shown on the screen. The video then goes on with a close-up of the woman’s mouth tearing fish off her fork with her teeth. Other clips of animals slaughtered for consumption, including pigs, sheep and cows, are also juxtaposed as the other two persons – a woman and her husband – eat their meals. “They just don’t care about animals like we do, babe,” the husband says, taking a bite of pork. “Can’t we treat all living things the same, please?” the first woman asks.

The ad, which informs that no animal was harmed, consumed or purchased during the production, ends with the three friends looking down at their food in disgust as they begin to make the connection.

Viewers are then directed to the maketheconnection.io website, which gives meat substitute recommendations, as well as health and animal welfare information.

The advert is set to air on various UK channels over the next month.

In 2021, the Make the Connection ad featured a young couple in a grocery store looking for an extra fresh lamb. When an actual lamb is put into their arms and they are asked if they want it chopped or wrapped, the look on their faces changes and realize that, just because they can’t see the victim’s face, doesn’t mean there wasn’t a victim. The ad encouraged consumers to embrace real compassion and love for all human beings, not just those that look like us.