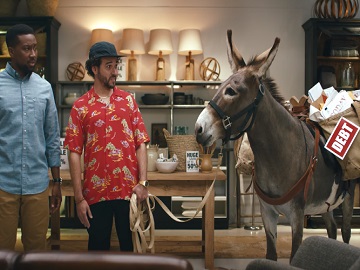 Upgrade promotes its Upgrade Card, which combines the low cost of a credit card with the predictability of a personal loan, in a hilarious commercial.

The spot features two friends in a furniture store who look at a couch. One of them, who has a donkey representing his debt as a pet, thinks it’s awesome, but he can’t afford it because he’s saddled with so much credit card debt.

His fellow tells him that he needs an Upgrade card, mentioning that this card rolls all his monthly purchases into one easy installment loan so he can avoid stuff like that (referring to his friend’s debt donkey). He also mentions that he earns triple cash rewards, which makes his friend ask where he has to sign up. “What about this guy?” he asks the donkey owner, referring to the animal. “He’s dead to me,” answers the owner.

The commercial ends with the voiceover urging viewers to get their Upgrade card at upgrade.com.