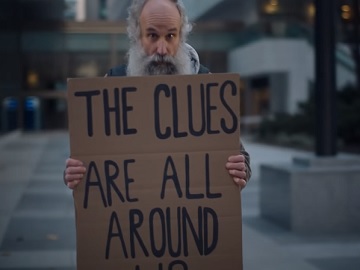 University of Phoenix highlights that its competency-based Master’s programs put your relevant professional experience to work so you can earn your degree in less than a year, for under $11k, in its latest commercial.

Titled “Master’s on your mind”, the 30-second ad opens with a man telling his wife, while having breakfast, that he was thinking about going back to school to get his Master’s. She answers she just saw something that said you could do it in a year for like 11K. He doesn’t say anything else, but as he goes about his day, all kinds of things that involve the number “11” happen. He has the order 11 in a coffee shop, he hears a woman saying “Here, at 11” during a phone conversation with someone, he gets a taxi to go to 1111 Masters Boulevard and must pay 11$ even for the ride. Arrived at the address, he sees a homeless man holding a cardboard in his hands and saying “the clues are all around us”. As he takes a look at an ad placed in a bus station, he sees the offer from the University of Phoenix, which gives professionals the chance to earn their Master’s degree in less than a year for less than 11K.

“Some things are too obvious to be a coincidence,” the voiceover says at the end of the commercial, which directs viewers to phoenix.edu.