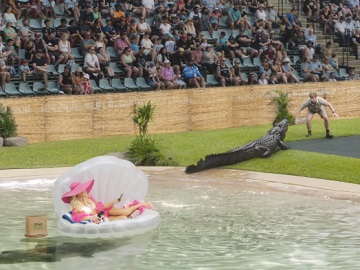 Uber has enlisted Paris Hilton to star in a new ad for Uber Eats.

The spot, part of the brand’s “Tonight I’ll Be Eating” campaign, sees the famous blonde, who joined Bindi, Terri and Bob Irwin as the newest member of Australia Zoo, dressed in a hot pink playsuit, lounging on a seashell-shaped inflatabled, with one of her Chihuahuas, and saying that tonight she’ll be eating kingfish ceviche with her zoo fam. At this point, she asks the Irwin family if they wants some, but they are a bit busy with a crocodile, which makes Paris conclude that this way it’s more for her.

The commercial ends with the tagline “Tonight, I’ll be eating…” flashing across the screen.

In another ad, Paris Hilton accidentally feeds her Chihuahua to a snake.

“Uber Eats is such a good fit for me and my brand because I actually use it every day. I love it! I love food, I love ordering and I love the Uber brand, so when I got the call to do this, and it was with Australians and the Irwins, I thought, ‘This sounds so fun.’ I love the Aussies!,” Paris said in a press statement.

Hilton joined thus the ranks of several other celebrities that starred in Uber Eats campaigns, including Kim Kardashian, who filmed a wildly successful Uber Eats commercial with Magda Szubanski in 2019.