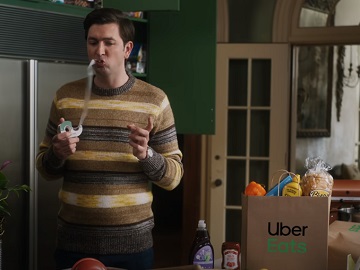 Nicholas Braun stars in a new ad for Uber Eats, part of the brand’s “Get Anything” campaign.

The spot features the Succession star eating tape and raising the question “Now that you can get anything delivered with Uber Eats, can you eats anything you get delivered?” He comes up with an opinion: “I’d say ‘Probably'” but onscreen lines advise the opposite: “Get anything. Don’t always eats it”.

This is not the first time the American actor stars in a commercial for Uber Eats. He has also appeared in the Uber Eats 2022 Super Bowl commercial, alongside celebrities Trevor Noah, Gwyneth Paltrow, Jennifer Coolidge, and several other people, eating products that shouldn’t be eaten, such as a stick of deodorant, a tube of lipstick, cat litter, diapers, and more. The ad, which saw Braun tasting some dish soap, highlighted that consumers can have lots of other items, such as convenience goods, delivered to them through Uber Eats.

However, Uber Eats is also known for its partnership with multiple other famous faces, including Paris Hilton and Kim Kardashian, who filmed a wildly successful Uber Eats commercial with Magda Szubanski in 2019.