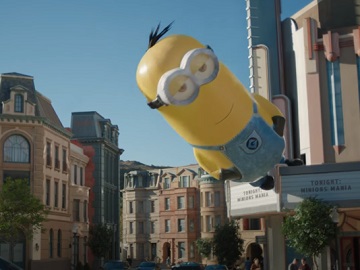 Uber Eats has launched a new ad campaign to highlight its on time deliveries and inform that Uber One members get 3 months with $0 delivery fee in case of late delivery of orders.

One of the spots, titled “Inflatable Happen”, opens with a delivery person taking over a bag for delivery. While the voiceover declares that Uber Eats orders are on time 95% of the time, but occasionaly something unpredictable happens, a giant, inflatable Minion is shown breaking free and, after paving a path of destruction, ending up right into the door of a restaurant where the Uber Eats associate is. On a smartphone where the Uber Eats app is installed, it is shown how the estimated arrival time changes, delaying the delivery with 2 minutes.

The narrator also mentions that, if your Eats ever get stuck, you will get 3 months with $0 delivery fee.

“Get 3 months $0 delivery fee if late happens with an Uber One free trial” an onscreen line reads at the end of the commercial.

The “on time” claim is based on Latest Arrival time shown after order is placed. Orders are late if delivered after this Latest Arrival time. The offer ends February 19, 2023. Current Uber One members are not eligible. Viewers are also informed that subscription will auto-renew at the currently monthly fee starting 3 months from initial enrollment in the Uber One free trial and every month thereafter.

Previous: Fetch by The Dodo What Are They Thinking? Commercial – Feat. Cats and Dogs of Different Breeds
Next: Free McDonald’s for Life Commercial