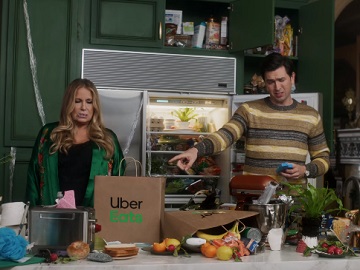 Uber Eats highlights that consumers can have lots of other items, such as convenience goods, delivered to them through Uber Eats in its Super Bowl commercial.

The spot features a diverse cast of celebrities, including Trevor Noah, Gwyneth Paltrow, Nicholas Braun, and Jennifer Coolidge, along with several other people, eating products that shouldn’t be eaten, such as a stick of deodorant, a tube of lipstick, cat litter, diapers, and more. After receiving one of her infamous Goop candles in her Uber Eats delivery, Paltrow takes a bite from the side and says “This candle tastes funny. Not bad, but funny.” Coolidge wonders if she can “eats it” if it is delivered with Uber Eats and Trevor Noah is shown biting into a light bulb. Nicholas Braun, on the other hand, tries some dish soap, which he admits “tastes bad”.

Speaking of the celebrities starring in the ad, Georgie Jeffreys, director of marketing for Uber Eats, said the company “looked for talent you don’t often see in commercials” and that it wanted the commercials to be “unpredictable”.