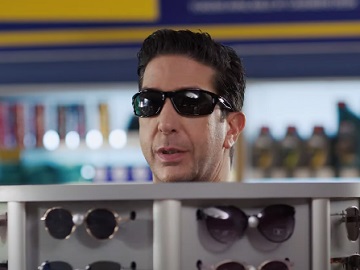 British bank TSB has released a new TV ad featuring David Schwimmer. This time, David shows us how each time you spend on your Spend & Save current account debit card, your savings could be sneaking up on you.

The 30-second ad, part of the bank’s “Life Made More” campaign, sees the Friends star playing an elaborate game of hide and seek. He is actually a master of disguise, showing up in unexpected places, including as a chair in a salon and as a painting in a restaurant, to spread the word about the Spend & Save current account debit card. He says that, “each time you spend on your debit card, you could be topping up your savings, too, helping it grow into something you’ll eventually notice”.

“Making the most of your money. That’s life made more,” he adds at the end of the advert, while eating an ice cream.

Created by McCann London and directed by Jeff Low, the advert marks the second time Schwimmer starred in a TSB advert.