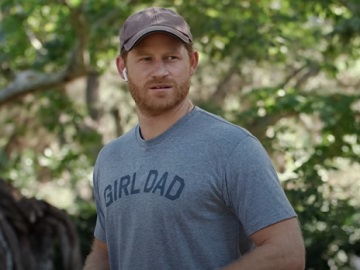 Prince Harry shows off his acting skills in a commercial for his eco-travel firm Travalyst.

The spot, part of the royal’s efforts to encourage New Zealanders to think of sustainability when planning their holidays, features Prince Harry clad in workout clothes and a “Girl Dad” T-shirt jogging in the California woods and being interrupted by a “rating agent” named Rhys Darby, who accuses him of having dropped a lollipop wrapper four years earlier, when he went there with his wife, Meghan. Harry says it wasn’t him the one who threw away the wrapper and Darby admits that “it might have been a confusing time” because it was windy. The Duke of Essex answers he doesn’t think it was confusing. “It was an incredible time. We had an amazing time in New Zealand. It’s beautiful,” he also says.

At this point, another rating agent (played by David Fane) shows up, telling Darby that he was supposed to approach Harry Styles, not “stylish Harry”. The prince is then given a four rating for his ecological efforts and praised for some of the things he does, such as using only one towel when taking showers, buying local honey, and not leaving the tap running while brushing his teeth.