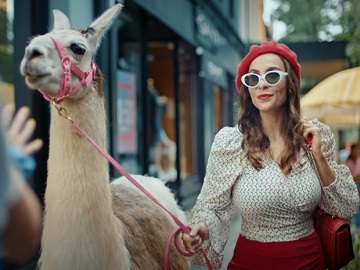 TK Maxx Australia has released a new installment in its “Unbelievable” campaign. This time, the retailer highlights that it has big brand handbags at epic prices.

The 15-second spot features a pair of twin sisters saying “That is unbelievable” when seeing a woman walking down the sidewalk with a llama as a pet. When the latter arrives in front of them, one of the two young women asks her if they can touch it. Believing they are talking about her big brand handbag, the woman shows it off and mentions that it’s from TK Maxx for about half the price, which makes the siblings simultaneously say “EPIC”.

The commercial ends with the voiceover saying the tagline “Big brands. Small prices”.

A recent similar ad released by the department store chain, which focuses on “big brand dresses at mind blowing prices”, features a woman who, after seeing another woman in a bubble floating in the air, says “Unbelievable”. The latter explains that her dress cost only $40 at TK Maxx, which makes the first woman add that it’s “mind blowing”.