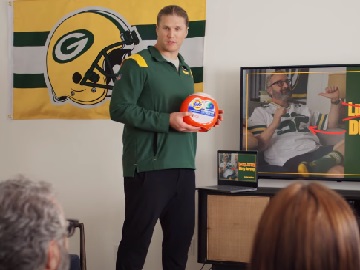 The spot features the NFL legend as he drops by an unsuspecting fan’s house to deliver a presentation on why his “lucky” jersey is really just a dirty jersey. The athlete points out that the man, named Ted, has used the jersey to wipe his tears of joy after a win, worn it while sleeping and he’s drooling, and some complete strangers have touched it. Moreover, he has also worn it in the delivery room of his daughter’s birth, an event that took place 13 years ago.

Ted’s wife, who’s on the sofa, attending the Lucky Jersey presentation, tells Ted that she loves him but it’s time to wash that jersey. “Deeply!” says Matthews, convincing the fan to do that. Ted declares that “when Clay Matthews says that, it makes so much sense”.

“It’s dirtier than it looks. It’s got to be Tide,” the voiceover says at the end of the commercial.

The brand has also enlisted several other celebrities in the past to front its ad campaigns. Among them are Davante Adams, who promotes the Tide Hygienic Clean Power Pods, Ice-T and Steve Austin, who starred in its “Cold Callers” campaign, urging people to use cold water when washing their clothes, Seinfeld actor Jason Alexander, who promoted the Tide Hygienic Clean Heavy Duty 10X Power PODS in its Super Bowl 2021 commercial, Gwen Stefani, Peyton Manning, Kenan Thompson and more for its “Laundry Night” campaign, which aims to make sure that no fan misses football because of laundry.

Earlier this year, the brand promoted its pods in a spot that tied in with Marvel Studios’ “Doctor Strange in the Multiverse of Madness” movie.

Based on the idea that even a Sorcerer Supreme deals with stains, the ad features Wong trying to clean the Cloak of Levitation before Doctor Strange comes back. The Cloak, which escaped into the city and stained itself with tuna melt, gets to experience the power of Tide Pods.