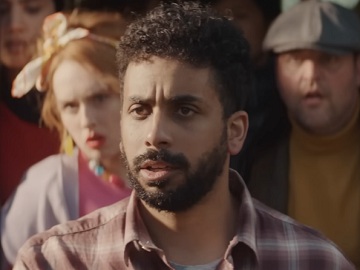 The National Lottery has launched a new TV advert, aimed at highlighting that “Amazing things happen when people come together”.

Created by adam&eveDDB and titled “The Chase”, the spot features a young man named Mo, whose winning lottery ticket flies out of the door of his local newsagent and is forced thus to embark on a chase to take it back. Luckily, Mo’s entire community scramble into action, starting a huge chase to track down the winning ticket, which is carried away by wind.

Mo and dozens of other people are shown running through a busy marketplace, down the high street and through many other places after the piece of paper, which almost ends up into a street sweepers. Eventually, they all arrive at a bus station where a teenage boy (one of the very few who didn’t join the chase) was waiting for the bus listening to music through his headphones. After a few seconds of tension and suspense, Mo is happy to see that the boy is eager to hand him over the winning lottery ticket and doesn’t hesitate to give him a hug.

The campaign is set to run across TV, VOD, Social, Digital, OOH and Digital Display for the rest of the year.