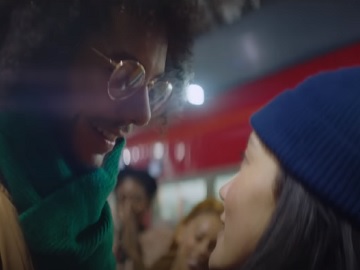 The National Lottery aims to inspire people to believe in the magic of hope and possibility in its Christmas commercial, from ad agency adam&eveDDB.

The spot, directed by Oscar-winner Tom Hooper, tells the story of a man and a woman who have a chance encounter on a train, on their way back home for the holidays. The man, who has a crush on the attractive girl he met, gives her his phone number on the back of a lottery ticket, hoping they will meet again at a party on New Year’s Eve. However, after arriving home, the woman realizes the phone number is smudged and doesn’t manage to reach the curly-haired passenger with a Crazy Frog ringtone. Her only chance to meet him again is to go to the train station on New Year’s Eve and hope she will hear his ringtone again. Luckily, this happens and the protagonist gets his lottery ticket, which it turns out is a winning ticket, back.

The soundtrack music is a new arrangement of George Michael’s “Faith” performed by artist Sleeping At Last.

The integrated multi-media channel campaign is set to run across social, radio, OOH, retail, and press.

“The National Lottery is a uniting force for good in the UK – with players raising over £30m every week for good causes. This latest campaign is all about The National Lottery’s ambition to bring people together. It also taps into the feelings of hope and possibility that we collectively experience at Christmas, showing that it’s always worth taking a chance to win big,” Matt Ridsdale, Camelot executive director, said in a press statement.