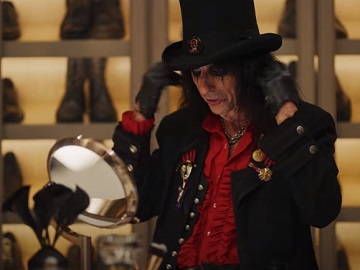 The spot features the rock singer getting ready for the day in his room and listening to SiriusXM, where his roommates Brandon Marshall and Tinx are spilling the tea and give an inside scoop on the other celebrities living in the home of SiriusXM. Cooper smiles when he hears that Braid Paisley never takes his hat off, that 2Chains wears one chain, and Conan’s hair isn’t naturally red, but washes it with fruit punch. As he gets in the car and keeps listening to SiriusXM, the Cooper is shocked to hear that Marshall reveals the nickname his roommates invented for him, which rhymes with Cooper and has the same letters, but starts with “P”. He immediately rushes inside and goes to the studio, where Marshall realizes he’s in trouble once he sees Cooper’s face.

The spot ends with the onscreen line “Everything you want to hear lives here”.

The campaign, which focuses on accessing exclusive SiriusXM programming outside the vehicle on the SXM App, has been developed in partnership with creative agency Translation and includes several other spots that feature Normani, Anitta, Bebe Rexha, Sway Calloway, Jeff Lewis, Diplo, Helio Castroneves, Bella Poarch, Storme Warren and the Morning Mashup crew.

The ads run on CBS, iHeart and ESPN radio, cable networks, and OTT channels such as Hulu, Roku, Viacom, Discovery+ and CBSi.

“The Home of SiriusXM’ campaign lets us shine a light on many of the talented people in our diverse roster of stars and personalities who create exclusive programming for SiriusXM and interact with each other in a way not found on other audio competitors,” Denise Karkos, Chief Marketing Officer of SiriusXM, said in a press release, mentioning that “The campaign is built for the long run, and you will see more executions of it in the future with surprising pairings and appearances by our talent.”