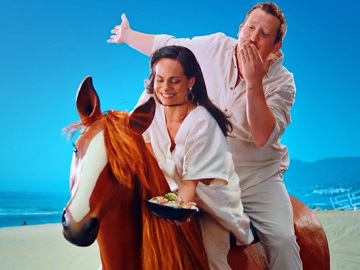 The Habit Burger Grill and its agency Party Land have released a series of new commercials for some of the chain’s menu items, including the Charburger and the Santa Barbara Cobb salad.

One of the spots features a couple riding a horse on the beach and the woman asking the animal if he wants some Santa Barbara Cobb salad. She then places the bowl in front of his mouth as if he wants to eat.

The ad concludes with the tagline “There You Hab It” flashing across the screen.

The campaign includes other two spots, each promoting a different menu item. One of them shows a woman eating a Charburger in a Habit Burger Grill restaurant, who is approached by a man telling her that he grew the tomato she’s eating on his farm and that the tomato even has a name: Jeremy Jr.

The other spot features a man eating a Double Charburger with cheese in the park and pushing away some seagulls.