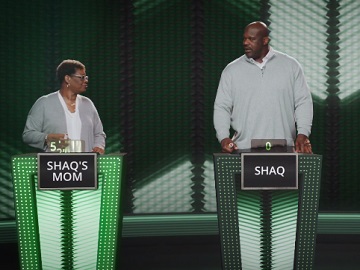 Shaquille O’Neal returns to the screens in a new ad for The General. This time, he shares the screen, though, with none other than his mother, Lucille O’Neal.

Titled “Game Show,” the spot features the NFL legend, his mother and another person as contestants on a game show. Ms. O’Neal manages to surprise everyone with her knowledge during the lightning round, when she gives the correct answers even before the host ends the questions. At some point, the game show host can’t help wondering how she is doing that. “Turns out moms are always right,” Shaq says looking at the camera. He then showcases the General mobile app and adds that “it turns out The General is a quality insurance company that’s been saving people money for nearly 60 years”.

The commercial ends with the O’Neal saying the tagline “For a great low rate and nearly 60 years of quality coverage, make the right call and go with The General”.

O’Neal has appeared in multiple other commercials for the insurance company. In one of them, he sits at the table, in a restaurant, with Michael Buffer, and in another one, he is found in the woods by Craig Robinson and some other fellows who it turns out have left them there a long time before for having recommended The General for car insurance.

The NFL legend has also worked with other brands in the past. Among them are Gold Bond, Buick, AriZona Cream Soda, and Icy Hot.