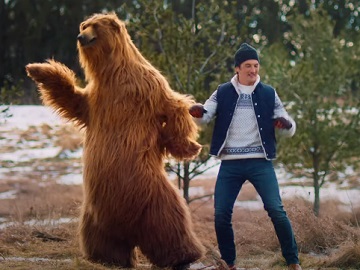 Finnish beer brand The Finnish Long Drink celebrates its launch on the American market in a commercial starring Miles Teller, who is also an investor in the brand.

Helmed by Agency Technology, Humans And Taste and Honor Society directing dup Cary & Jon, the spot features the Maverick actor in the Findland wilderness making friends with a bear. The two bond over their shared love of fishing, honey, dancing and, of course, a Long Drink.

“From the happiest country on Earth now available in America” an onscreen line reads alongside a can of The Finnish Long Drink.

The song playing in the ad is “Our Best Friends Male Vocal” by Pierre Perez-Vergara.

The campaign also includes other six spots in which couples learn the dangers of grabbing a “quick drink” in unknown locales like abandoned dive bars and packed fintech haunts instead of having a Finnish Long Drink.