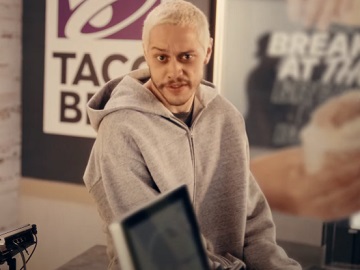 The ad begins with the comedian walking through a Taco Bell restaurant and talking to the camera saying “Sometimes we go too far. I have, and that’s why Taco Bell has hired me to make an apology for them.” At this point, looking at an employee ready to take orders from clients, he urges her to say she’s sorry, which makes her confused. The “Saturday Night Live” alum then goes on, declaring that Taco Bell “went a bit crazy with its breakfast” and that “what you need in the morning is tasty, simple food”, such as “fluffy eggs, melty cheese, sausage, hash browns, maybe wrapped in a warm tortilla”.

“That’s a Breakfast Crunchwrap,” points out the same employee, who – surprised to hear Davidson say “they should open a restaurant that only serves us breakfast crunch things” – is also asking him “Are you riffing or is this part of the commercial?”. The comedian admits he doesn’t know because he didn’t read the script.

Davidson also stars in another ad that shows him waking up from a dream thinking about the chain’s breakfast. The two ads are set to run until December 24.

Taco Bell, which admited it took innovation to unwelcomed heights in the past, when it came to its breakfast menu, is now offering for breakfast burritos, quesadillas and Crunchwraps, all stuffed with eggs, cheese, and meat.