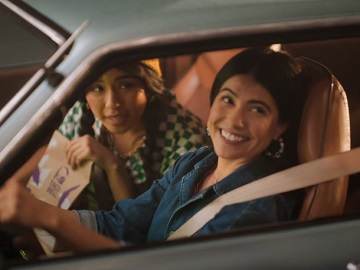 Taco Bell has dropped a new ad to announce that its Nacho Fries are back again to the menu, for a limited time only.

The spot features two young women in a car who decided to “abandon” for a short time their friend and drive to the nearest Taco Bell restaurant to get Nacho Fries. The girls can’t help eating them all before returning to their travel companion, who is not happy at all about what they did. “You can’t be mad. We brought you Nacho Fries,” they tell her, showing her the fan-favorite menu item that brings a hint of a smile on her face.

The voiceover states that the Nacho Fries are made with Mexican spices and are perfect with nacho cheese sauce.

Earlier this year, in March, the fast-food chain released a movie-inspired commercial to announce that its Nacho Fries are back again. The spot featured a young woman stuck in “an infinite time loop thing” who was able to enjoy her beloved Nacho Fries every single day. However, someone watching her realized that she was violating Nacho Fries limited timeline and sends a team to chase her down. The protagonist’s day ends with her trying to escape the pursuers and, at the end of the commercial, she is shown waking up again on the same day.

Taco Bell’s Nacho Fries, coated in bold Mexican seasoning and served with a dippable side of warm, nacho cheese sauce, are available for purchase a la carte or in a Nacho Fries Box.