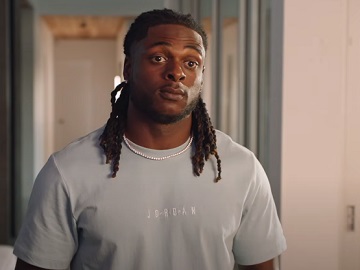 The spot opens with onscreen lines informing that the fast-food chain wanted Davante Adams in its ads and he wanted a Taco Bell in his house. The result is a commercial featuring the wide receiver for the Las Vegas Raiders hearing that order number 1 is ready. The voice comes from a Taco Bell employee who announces the order on microphone. When Adams tells him that there’s nobody in the room but him so he doesn’t need to do all that, the worker answers “I don’t tell you how to run routes, although I did play in junior high”.

Adams interrupts him with a taco crunch and then takes his tray and leaves. “I’ll get that. It’s all good,” the worker says.

In another ad, released earlier this year, Adams is shown moving to Las Vegas and being constantly interrupted by his new neighbors. There is one person, though, who Adams is glad to see at his door: the man from Taco Bell bringing his order.