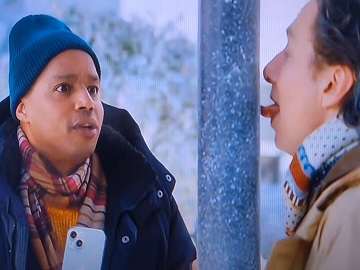 Zach Braff and Donald Faison co-star in a new ad for T-Mobile, promoting, this time, the iPhone 14.

The spot features Braff having his tongue stuck to a pillar, on a sidewalk, and Faison taking a picture of him. Noticing his friend’s new smartphone, Braff asks if that’s new iPhone. Faison confirms, saying he just got the new iPhone 14 with its amazing camera at T-Mobile. Asked by his friend in trouble what he can do now (referring to the fact that he can’t move his tongue from there), Faison urges him to switch to T-Mobile, saying he could get an iPhone 14 with Apple TV+ included and over $225 in benefits every month, which makes Braff exclaim “Wow!”.

The commercial ends with the voiceover saying “Only on T-Mobile. Get the iPhone 14 on us. With Apple TV+ included part of a $225 in benefits every month on Max Family Plans”. The two fellows are also shown watching together a show on the iPhone 14, out in the snow, with Braff having his tongue wrapped in aluminium foil.

Braff and Faison appeared in several other ads for T-Mobile in the last 12 months, including the carrier’s Super Bowl 2022 ad, in which the two actors are doing a riff on Leonard Bernstein’s “I Feel Pretty” from West Side Story. Faison has also helped Braff, who was tired of paying so much for home internet, discover internet freedom with T-Mobile, and showed him how much he can save with T-Mobile Home Internet.