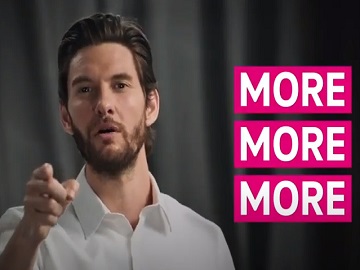 T-Mobile has released a new ad to promote its services.

The commercial opens with Ben Barnes asking for viewers’ attention and telling them that AT&T and Verizon customers are experiencing “unexpected price hikes” and “economic adjustment charges”. He then says there is a solution and urges consumers to switch to T-Mobile Magenta Max because this will give them the chance to get up to $100. They will also get T-Mobile’s Price Lock Guarantee, which means the rates of their chosen rate plan won’t be raised, ever.

“Because you are entitled to more,” the British actor explains at the end of the commercial, which also sees the lines “Switch today and get up to $1000” appearing on the screen.

The deal is valid via $200 virtual prepaid card per switched line for up to 5 MAX lines.